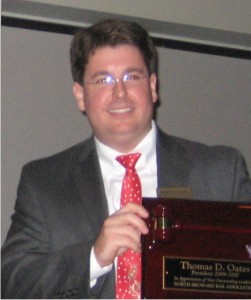 At the annual Holiday Party for the North Broward Bar Association, Past President, Thomas Oates, was awarded a plaque in appreciation of his service as President for the 2009-2010 term.  Mr. Oates was elected to the position of President of the North Broward Bar Association in June 2009, succeeding then President, Stuart House.  During his term as President, the NBBA hosted several prominent speakers including Florida Senator Jeremy Ring, Florida Bar President Jesse Diner, Chief Judge Victor Tobin, Judge Ilona Holmes, and Florida Bar President-Elect Scott G. Hawkins. The plaque is a token of the NBBA’s appreciation for the year-long dedication and service of the outgoing President to the local bar organization.